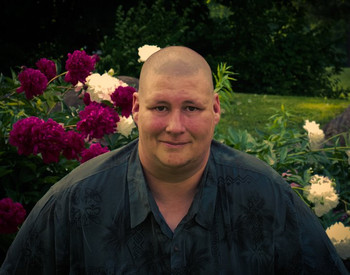 Everywhere Dave looks, he sees details; he sees things that most people pass by as they blend into the surroundings. As a photographer, Dave uses the 'attention to detail' as a guide in most everything he points his camera at. In nature, it's easy to pick out the insect or a stamen loaded with pollen, but when he gets to photograph people, he looks for expressions or features that really draw out the 'detail' that make the pictures come to life. He likes to capture a memory through a photograph, and when it is looked upon in the future, remembrance and imagination bring that photo to life.

Dave started out shooting film cameras at a very young age. The old 110 cameras and eventually into the 35mm. He never developed his own film, but really enjoyed the pictures he got to take; mostly of family and things around him, perhaps on a bike ride or a vacation. It was all fun for him and he just liked shooting pictures.

When the digital age came around, he began shooting everything. The limitations of film exposures were non-existent. He learned a lot through the point and shoot cameras, but only enough to get shots that remained in a folder for his own viewing pleasure. Then came the opportunity to start using a digital camera that had specific settings through a menu that was able to have the lenses changed. Oh! How the world changed!

That was nearly two years ago...

Details are more vibrant, memories are more easily captured, and, oh, how the pictures come to life!

He still loves to capture memories, and he does that through the lens. Dave's particular consideration of the composition of life around the person or thing he is directing his camera at creates an image that will endure lifetimes of memories. A scene, an event, a personal or family portrait: There is a story (a memory)  waiting to be incorporated within the frames of an image.

Dave is currently involved with nature & landscape photography, urban exploration, senior photos, and family portraits. He really loves involving as much fun as he can in each photographic opportunity. Dave currently resides and works in Jackson, Michigan USA.